If the people had intended to impose additional requirements for the redistricting process, they would have said so in the NH constitution, the judge wrote.

Steven Porter October 6, 2022 — 8 minute read
📝
This is your morning memo. Not a member? Sign up to get the memo straight to your inbox.

Good morning, Granite Staters. The general election is just 33 days away. Here's your rundown of the latest in NH politics. First, the highlights:

📊Polls show incumbents ahead, not always by much

Politicians recently redrew the districts for NH Senate and Executive Council. Whether they did so in a way that unfairly favors one political party over another isn't a question for state judges to decide, a state judge has decided.

A group of Democrats had filed a lawsuit in May alleging that the 2022 redistricting process, which was led by the GOP-controlled legislature, gave Republicans an advantage in 16 of the 24 state Senate seats and four of the five Executive Council seats, as Todd Bookman reported for NHPR.

But a judge dismissed the lawsuit Wednesday, concluding the lawsuit presents a purely political question the courts must not answer. The decision from Hillsborough County Superior Court Judge Jacalyn Colburn reasoned that courts can weigh in only on whether new districts meet the requirements expressly outlined in the NH constitution.

"Because the newly-drawn districts meet those express requirements, the Court must decline to consider the plaintiffs' challenge to the constitutionality of the districts based on claims of excessive political gerrymandering as such claims present non-justiciable political questions," Colburn wrote.

If the people of New Hampshire had intended to impose additional requirements for the redistricting process, "they would have explicitly provided those requirements alongside the existing ones in Part II of the constitution," Colburn wrote.

The plaintiffs have until Oct. 15 to file a motion to reconsider and may also choose to appeal to the NH Supreme Court, according to the NH Attorney General's Office.

Energy assistance on its way

Executive Council approves funds for heating and electric aid. All the major electric utilities have hiked their rates, and home heating fuel costs are expected to rise this winter as well, so the state will send $35 million in surplus tax revenue to five regional agencies to distribute credits to qualified NH residents. This program is separate from LIHEAP, an existing federal program. (Paula Tracy for InDepthNH) #nhleg #nhgov

The latest Saint Anselm poll shows NH voters dislike Democrats, but dislike Republicans more. "The bad news for Democratic incumbents is that their standing with voters is weak. The good news for Democratic incumbents is that their Republican challengers are even weaker," said NHIOP Executive Director Neil Levesque (Andrew Sylvia for Manchester Ink Link; see also Adam Sexton for WMUR and the poll itself).

Promising new offensive against Hassan, Bolduc finds himself on defense with some voters. " 'She's the one that needs to get over it,' Bolduc said to a couple in their 20s who hadn't asked him about abortion. ... In fact, no voter at the Red Arrow brought up abortion with Bolduc that morning. But several said they were aware that Bolduc had staked out fresh – and sometimes conflicting – positions on a number of issues since winning the Republican primary." (Josh Rogers for NHPR) #nhsen

Candidates in NH01 focus on national themes while trying to reach local voters. Pappas has highlighted abortion access, his opponent's false claims about the 2020 election, and his support for prescription drug pricing reforms for seniors. Leavitt has highlighted high inflation, concerns about the number of migrants at the southern border, and her opponent's alignment with Democratic Party leaders. (Todd Bookman for NHPR) #nh01

Manchester Democratic candidates gather before final election season sprint. "Democratic candidates from across the city gathered on Sunday afternoon to take a break from knocking on doors and renew their spirits for the final few weeks of campaigning and share their stump speeches with anyone interested in stopping by." (Andrew Sylvia for Manchester Ink Link) #mht #nhleg

She wants NH voters to eliminate a position she used to hold. In a guest column, Donna Sytek of Salem (a former Speaker of the NH House) urges the public to vote "yes" on Question 1 on their Nov. 8 ballot to eliminate the Register of Probate position. "All that remains of the Register of Probate is the title, which is enshrined in the state Constitution as an elected position along with other county officials." (Donna Sytek for Foster's Daily Democrat)

Laconia forum on homelessness hears from voice of lived experience. Kathryn Hatzenbuhler shared her story during the first of seven forums about the city's homelessness challenges. Det. Eric Adams said the number of unsheltered children, adults and families in Laconia jumped from about 80-100 before the pandemic to roughly 300-400 now. (Jon Decker for Laconia Daily Sun)

Former NH Supreme Court Chief Justice John Broderick the consensus pick to manage $100 million YDC victims fund. "The chief job of the administrator will be to arbitrate disputes when lawyers for victims reject damage awards that the Attorney General’s Office has offered to them. ... The lead lawyers for most YDC victims ... said they won’t have their clients use this settlement process, but they did recommend that the attorney general pick Broderick." (Kevin Landrigan for Union Leader)

Maryland Gov. Larry Hogan, who's among several prominent Republicans toying with the idea of running for president in 2024, will be around for breakfast on both Thursday and Friday:

In a podcast interview with NHJournal this week, Hogan touted his record as a Republican governor of "the bluest state in America."

📅
Know what's next: To see notable NH politics events on the horizon, check out the Granite Memo calendar.
Share this post
The link has been copied! 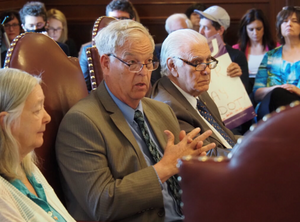 
Bill McKibben on 'radical libertarianism' in NH and the climate crisis 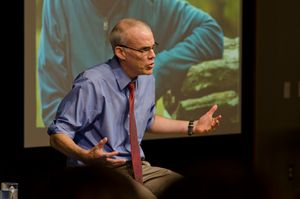