The appointees will work with election officials during the primary election to ensure compliance with NH law.

Election monitors have been appointed to oversee upcoming primaries in Bedford, Windham, and Laconia Ward 6 after the Attorney General’s Office found “significant deficiencies” in those elections in 2020.

The election monitors will work with election officials during the Sept. 13 primary election and also review their handling of the upcoming election to ensure it complies with New Hampshire law. They will help educate election officials and oversee their work, submitting a report to the state within 30 days of the election about any issues they observe.

“There were three towns that had significant issues last election,” Secretary of State David Scanlan said in an interview. Scanlan said in both Windham and Bedford the problems stemmed from the high volume of absentee ballots the towns received.

“Bedford misplaced a tray of absentee ballots, but given the volume, I mean, it’s understandable,” he said. “And Windham, because of the high volume, they tried to speed up the process using a letter-folding machine and that’s what caused the problems.”

The problems in Laconia were not related to absentee voting. Rather, election officials put ballots in the side compartment of the ballot collection box but never took them out, so 179 ballots were never counted. The moderator also double counted ballots with write-in votes. Those ballots are diverted from the ballot counting device, and the moderator is supposed to count only the write-in votes.

“The moderator instead counted every single vote on the ballot. That resulted in significant double counting,” said Myles Matteson, deputy general counsel at the Attorney General’s Office’s election law unit.

The secretary of state recruits and appoints election monitors who are familiar with election law.

The election monitors are appointed only to observe and report on the upcoming primary, not the general election. 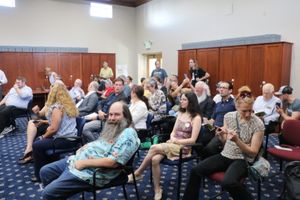 
NH state primaries: Who is running in your district? What do they stand for?