Scanlan captured 237 of the 413 ballots cast in a joint convention of the NH House and NH Senate, which met Wednesday for Organization Day.  That means more than 20 Democrats backed the GOP incumbent rather than their party's challenger.

In fact, the lawmaker who rose to nominate Scanlan was Sen. Lou D'Allesandro, a Democrat from Manchester. D'Allesandro recounted Scanlan's record of service and urged fellow lawmakers to reelect the incumbent.

Scanlan's supporters and detractors alike cited his handling of recounts after the Nov. 8 election as evidence either of his qualifications or shortcomings.

Sen. Donna Soucy, a Democrat from Manchester, faulted Scanlan for ordering a second recount in the Hillsborough 16 state rep race. An initial recount in that race showed the Democratic challenger winning; however, there were concerns that not all ballots had been included. Democrats sued to halt the counting, but a judge ordered the second recount, which showed the Republican had won as initial election results had indicated.

Levesque, who captured 175 votes, issued a statement congratulating Scanlan on his victory.

“I ran because I believe our Secretary of State’s office can and should do more to protect access to the ballot for New Hampshire voters, so we do not remain the hardest state to cast a ballot in the country. Even though we did not win, I will continue to use my platform to advocate for pro-voter policies," she said.

Scanlan stepped into the job 11 months ago when his predecessor, long-serving Secretary Bill Gardner, retired after more than four decades in the job.


7 important things that happened Wednesday at the State House 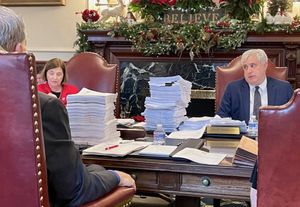