How close were NH Senate races? Here are all 24 contests, ranked by margin.

Just one incumbent lost their reelection bid, but the NH Senate will see plenty of new faces.

Republicans held onto their majority in the NH Senate in Tuesday's election, but they didn't grow it, according to unofficial election results from the NH Secretary of State's Office.

The chamber's partisan makeup will stay the same at 14-10, after the parties each flipped one seat. Both sides celebrated with their own spin on the overall outcome. While Republicans touted their continued majority, Democrats lauded their defensive maneuvering and looked ahead to 2024.

"We gave no ground whatsoever to the Republicans," current Democratic minority leader NH Sen. Donna Soucy said Thursday on a call with reporters. "We are extremely well-positioned to reclaim the majority in the next election cycle," she added.

For the coming session, the Republican caucus decided Thursday to nominate NH Sen. Jeb Bradley to serve as NH Senate President, as NHJournal reported. That role has been held by NH Sen. Chuck Morse, who mounted a bid for U.S. Senate rather than seek reelection to his District 22 seat. Morse lost his federal race in the GOP primary.

NH Sen. Tom Sherman, a Democrat, opted to run for governor rather than seek reelection to his District 24 seat. Sherman lost to Republican incumbent Gov. Chris Sununu in the general election.

Just one incumbent NH senator lost a reelection bid on Tuesday, but the chamber will see plenty of new faces, thanks to open races in one-third of the districts, as Amanda Gokee reported for NH Bulletin.

The redistricting process completed this year means incumbents who won reelection will see their district boundaries shift from the old map to the new map.

Here are unofficial election results from the 24 races for NH Senate, ranked by margin from narrowest to widest. Seats that switched from one party to the other are marked as flips (🔀) regardless of whether an incumbent sought reelection.

The narrowest margin came in the race for NH Senate District 12, where the incumbent Republican prevailed. The district covers Rindge in Cheshire County, plus southern Hillsborough County communities from New Ipswich to Hollis and Nashua's Ward's 1, 2 and 5.

In the race for NH Senate District 11, the Democratic challenger unseated the Republican incumbent. Both before and after redistricting, this district covers the same four Hillsborough County communities: Wilton, Milford, Amherst and Merrimack.

This is the third time Chandley and Daniels have faced off for NH Senate. Chandley beat Daniels in 2018, then Daniels beat Chandley in 2020, and now Chandley has beaten Daniels again in 2022.

Daniels, who chairs the Senate Finance Committee, was the only NH senator to lose his bid Tuesday for reelection.

In the race for NH Senate District 9, which covers a narrow strip of communities through southern Cheshire County and central Hillsborough County, including Bedford and Hinsdale, the Republican prevailed.

Before the election, this district was featured in a report by Amanda Gokee for the NH Bulletin headlined, "Gerrymandering on the ground: A redrawn Senate District 9 ties together 'polar opposite' towns."

In the race for NH Senate District 18, which covers Manchester's Wards 5-9 and Litchfield, the Democrat prevailed. 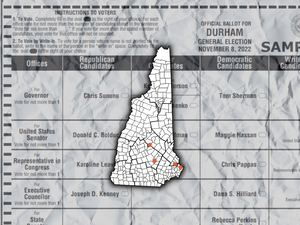 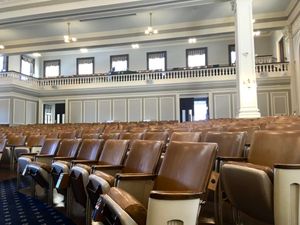