Voters cited abortion, Social Security, the climate crisis, energy independence, or economic pressures, as the issue that brought them to the polls.

Ronald Smith, 57, of Seabrook said he voted Republican for the first time in his life during Tuesday’s midterm election for two reasons.

He wants the southern border secured against fentanyl traffickers, whom he blames for his nephew’s drug overdose. And he can no longer afford his groceries.

“Four dollars for a dozen eggs? Four dollars for a loaf of bread?” he said. “I’m spending three times what I did each week.” The ribeye steak he picked up at Market Basket recently went back into the cooler when he saw the $18.99 price tag.

Smith was one of hundreds of thousands at the polls in New Hampshire Tuesday, taking part in an election in which three of New Hampshire’s four Democratic members of Congress – Sen. Maggie Hassan and Reps. Chris Pappas and Annie Kuster – were defending their seats. Their challengers – Don Bolduc, Karoline Leavitt, and Robert Burns, respectively – have spent months tying their opponents to an unpopular administration saddled with a struggling economy. The incumbents, in turn, warned of the consequences of Republican majorities in Congress.

On Tuesday it was time for the people to have their say. From Dover to Nashua to Littleton, voters cited opposition to abortion or support for reproductive rights as the issue that brought them to the polls, while others pointed to concerns about Social Security, the climate crisis, energy independence, and the state of public education driving their decision to vote – and the candidates they chose.

But as many political observers predicted, a well-worn political truism from the 1990s reigned supreme: “It’s the economy, stupid.”

Peter Duk of Lyman, who voted for Republicans, said skyrocketing costs were the primary reason he came to vote.

“Fuel costs affect everybody,” he said. “It affects you at the grocery store, everywhere you go, building supplies, anything that comes to you by diesel truck.”

Prices across the country rose 8.3 percent from September 2021 to September 2022, according to the most recent data from the U.S. Labor Department. Average gas prices in New Hampshire hit a record high in mid-June 2022, at $4.99 per gallon, according to AAA; the state average has since fallen to around $3.70 a gallon. And inflation didn’t just boost Republicans – voters who went for Democrats said it motivated their vote too.

“I’m hoping somebody gets the gas prices down,” said Jon Johnson of Littleton. “Come on. How are people supposed to survive this winter?”

Johnson said he mainly voted for Democrats, although he and his wife, Pat, also voted for incumbent Republican Gov. Chris Sununu. Johnson said while he’s tired of the direction things are going, he disagrees with many Republican positions.

“And we don’t eat no steak or no lobster,” Jon Johnson said.

Unlike the Johnsons, there was no ticket splitting this time for Sharon Kisch. The Lyman resident voted exclusively for Republicans, the party she believes will tackle not only economic issues, but abortion and crime. “I’m going full on and let’s see if something can be done,” she said. Kisch was angry Democrats didn’t make birth control available over the counter. “I would love to make abortion rare again, so it’s not an issue anymore.”

Kisch was among several voters who cited the abortion issue in the wake of New Hampshire’s new 24-week abortion ban and the June Supreme Court ruling in Dobbs v. Jackson Women’s Health Organization. In that 6-3 decision, justices said the U.S. Constitution does not provide a right to an abortion, reversing Roe v. Wade and sending abortion policies to states and Congress to legislate.

Kat Houle of Nashua is a Democrat who has supported Gov. Chris Sununu in past elections. She voted for him in 2018, and then again in 2020, impressed by his handling of the COVID-19 pandemic

But that changed in 2021 when Sununu signed into law a ban on abortions after 24 weeks of pregnancy, a measure added into the state budget by the Republican Legislature. Suddenly Houle, a lifelong abortion rights supporter, soured on the governor.

“He said he would never vote for an abortion ban,” she said. “And then he did it. So it was like a stab in the back.”

Brian and Alison Dear of Lyman also said abortion was their No. 1 issue, and neither could support any candidate who didn’t share their anti-abortion position. “We value life. We feel that all people are created equal, even those who can’t speak for themselves,” said Alison Dear.

The couple brought their three children with them to the polls, including their 18-year-old son, who voted for the first time in the primary.

Abortion rights were a singular issue for Jason Kimmerer of Manchester, too. Kimmerer, who has voted for Republican state candidates in the past, was undecided until two weeks before the election, when he started researching candidate positions on abortion and women’s rights. He quickly decided he preferred Democrats.

“Probably at the end of the day, I think it probably should be a federal issue,” he said. “Just because I don’t think that it should vary state to state.”

Ingrid Ahlberg of Newmarket also voted for reproductive choice: “I have a daughter of childbearing age.” Equally important, she said, are candidates’ approaches to governing.

“We need people who can think about complex ideas and understand complex problem-solving and how changes become real,” she said.

Ahlberg said she hasn’t heard that from Republicans. And, she believes it’s an area where Hassan and Pappas have demonstrated capability.

“He has a quiet way of working with complex issues, and she saw the complexities of New Hampshire as governor and has carried that experience with her,” she said.

Dee Pelotte of Littleton disagreed. “Get the Democrats out of there,” she said. “I know it sounds terrible, but that’s my feelings.”

For some Democratic voters, the climate crisis – and an interest in state and federal policies to reduce carbon emissions – was a top issue.

Over the summer, Congress passed a bill containing a record $369 billion investment in clean energy, including clean energy tax credits for consumer purchases of solar panels and electric vehicles, investments in green energy technology, upgrades to public electric vehicles like school buses and mail vans, incentives for sustainable farming practices, and others.

Climate change was indeed the top issue for Caitlin O’Connor of Littleton. O’Connor, who works in a restaurant and is the mom to two daughters, voted for Democrats up and down the ballot, with the hopes that they will boost renewable energy, including solar, to increase the country’s energy independence.

“I don’t like all of the candidates I voted for, but I like them better than the other choices available,” she said.

While some Republican voters shared O’Connor’s concern about energy independence, there was disagreement over how to achieve it.

Dennis Fontaine, also of Littleton, said he voted exclusively for Republicans, whom he believes will boost domestic fossil fuel production instead of purchasing it abroad. He thinks that approach will help lower costs, addressing the country’s most pressing economic issues. “This is crazy – sitting on all this oil and then be buying it from other countries,” he said.

Fontaine was not concerned about the climate implications of using fossil fuel because he believes the U.S produces it more cleanly than other countries.

The thought of losing Social Security posed a more imminent crisis for Mike Lessard of Dover, who showed up to oppose candidates who have expressed an openness to doing away with it.

He said he is concerned Republicans will privatize it or scale back benefits. Lessard is disabled and relies on his checks, but he’s also worried for others counting on benefits after retirement.

He said he can’t support Republicans like Bolduc and Leavitt, who have both indicated support for privatizing Social Security.

“It really scares me,” he said. “It’s taking away from people’s hard work while they were working and paying into it.”

Social issues mattered to voters, too. Some cited their concerns that public schools were teaching with an emphasis on structural racism, while other conservatives said they wanted legislation to ensure parents are informed more of the choices made by their children – including around gender identity.

Samantha Bellows was among those inspired to vote by local school issues. Last year, Bellows, of East Kingston, joined “Exeter Pact,” a parent-driven advocacy group seeking to reform teaching in New Hampshire public schools. The organization says it is nonpartisan, but Bellows sees Democrats as an issue, alongside the school policies and lessons around race and gender she opposes.

“We have friends that have kids that are school age and want their kids to be able to go to school and learn school things,” she said.

Keeping an eye on the polls

With so many major issues driving voters to the polls, New Hampshire election workers stayed busy – and vigilant.

In Dover, Gary Gilmore was overseeing heavy voting in Ward 3 – with an additional 400 or so absentee ballots that couldn’t be opened and processed until after 1 p.m. under state law. Gilmore remained hopeful he’d be home by 11:30 p.m. “But I’ve been here until 2 a.m. before, so …”

John Charron was also watching over voting in Ward 3 – as a poll challenger for the Republican Party. He was on the lookout for irregularities but hadn’t seen any by midday. Instead, he saw a voter turned away who was confused about where he could vote.

Charron said he didn’t expect any problems or violations of voting laws because he has faith in New Hampshire elections. He saw his role as a civic duty.

“I’m making sure that we are able to preserve our right to vote and that both sides have a fair election,” he said.

Tuesday marked Manchester Ward 12 Moderator Verna Perry-Beliveau’s 18th year as a moderator. And the volume of absentee ballots was considerable, she said.

“People are asserting their right to vote,” she said.

Still, Perry-Beliveau had no worries about finishing the count at some point in the evening after the polls closed. And she said she hadn’t seen any instances of members of the public harassing poll workers.

“Absolutely not, and if anybody did, I’d kick their asses out of here,” she said. 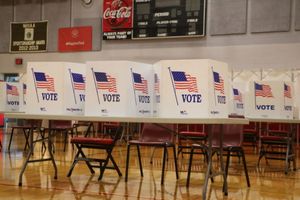